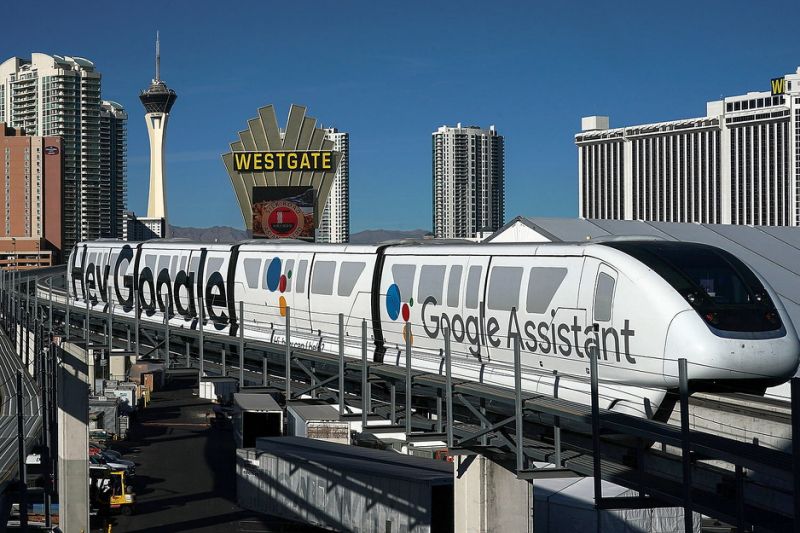 Amazon Alexa and Google Assistant duke it out at CES 2018

CES 2018 had more than its fair share of wacky items and compelling gadgets, but one of the biggest trends to emerge, once again, from the popular tech expo was voice-enabled devices.

Google (GOOG, GOOGL), meanwhile, went all out in its own splashy way, spending loads of money on a big outdoor CES booth and wrapping the Las Vegas Monorail in Google Assistant ads that screamed, “Hey Google.” There were also Google Assistant-enabled TVs, soundbars, and “Smart Displays”—  more or less speakers with displays built-in. Samsung (SSNLF) came a distant third, promising at CES that all of its devices and appliances would have its Bixby digital assistant built-in by 2020.

Voice-assistants are here to stay

Some of those devices made sense, yet many more — an Alexa-enabled mirror or Google Assistant smart lock, for instance — seemed more like mere marketing ploys to take advantage of the latest technological trends. But taken as a whole, they were a stark reminder that voice-controlled devices and appliances will play a large role in our lives in the coming years. More than 5 billion consumer devices supporting digital assistants like Alexa and Google Assistant will be in use in 2018, with almost 3 billion more added by 2021, according to IHS Markit. Of those devices, 39 million will be smart speakers, up from 27 million units shipped in 2017.

“The reality is, eventually, nearly everything is going to be voice controlled,” said Victoria Petrock, an analyst for the digital firm eMarketer.

Alexa will continue to have the edge in the short-term. According to eMarketer, Amazon Echo will account for 67.9% of the voice-enabled speaker market in 2018, with Google Home trailing far behind at 25.1%. Next year, Amazon’s market share is expected to dip 4% — yielding some market share to Google Home — but not enough to budge the needle.

“The big question is to what extent are all these different assistants going to be able to talk to each other in the home?” said Petrock.

As it now stands, voice assistants don’t interact with one another. That’s fine if you only fill your home with Alexa-enabled devices or Google Assistant-enabled devices, but your experience quickly breaks down if you buy devices from both camps. But let’s face it: with our hectic day-to-day, there’s realistically only room for one digital assistant in our lives. Who wants to switch back and forth?

How Amazon Alexa cornered the market

Unlike Apple (AAPL), which keeps Siri mostly under lock and key, Amazon (AMZN) early on opened up access to Alexa so outside companies and developers could develop functions for it, even integrate it into their own devices. It was a risky business move, but ultimately one that yielded Alexa’s impressive current market share. And as is Amazon tradition, it sells Echo speakers at-cost, slashing prices whenever possible to get as many Echo speakers into homes as quickly as possible. Head over to Amazon.com, for instance, and you’ll find a deal on its homepage offering $20 off if you buy three Echo Dot speakers.

What’s less clear is how the “smart home” will evolve in the medium-to-long term. Will one voice assistant end up ruling them all through an exhaustive selection of supported devices from third-parties, or will a company or outside consortium figure out a way for all the disparate devices to ultimately play nice? That’s a question not even Alexa or Google Assistant have a sassy comeback for.