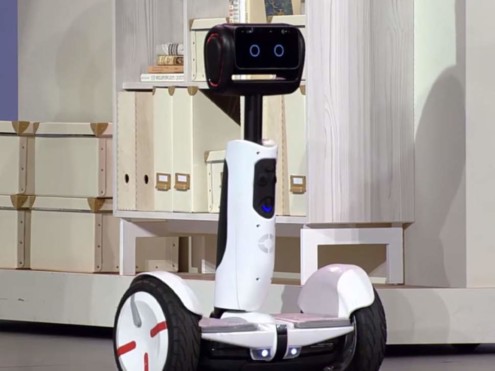 CES 2016: INTEL AND SEGWAY HAVE TEAMED UP TO CREATE A HOVERBOARD ROBOT BUTLER

Just in case you didn’t know that the future is right now, Segway and Intel have teamed up to create a hoverboard robot butler.

The sci-fi device, which is a self-balancing personal transporter with a built-in interactive robot, was uneviled at Intel’s keynote speech at the Consumer Electronics Show (CES) in Las Vegas.

A number of companies have put their names to the device – Intel, Chinese electronics company Xiaomi, Xiaomi portfolio company NineBot, and Segway. Segway were pioneers of the self-balancing personal transport device, but their original device, released in 2001, was far too costly and bulky to ever reach mass popularity.

However, they seem to have noticed the recent popularity of ‘hoverboards’ and created their own version – we don’t know too much about it now, but it certainly looks much more sturdy and less prone to explosion than most of the self-balancing scooters currently taking over the UK’s high streets.

The oddest moment of the keynote came when the transporter’s other feature was revealed – a small pop-up screen with two anthropomorphic eyes appeared from the top of the device and started speaking.

The transporter, now in robot mode, began moving around the stage and responding to the speakers’ commands like a good robot butler should.

It’s not immediately clear what exactly the robot does – demonstrations showed it could use its built-in cameras to follow someone, and a pair of clip-on arms made it look a bit more robot-like, but that’s it.

We’ll be sure to see more interesting features once a developer version of the device is rolled out the second half of this year. Intel is opening up the platform to creators and developers, in the hopes that they’ll be able to come up with some practical ways to take advantage of the robot’s functions.