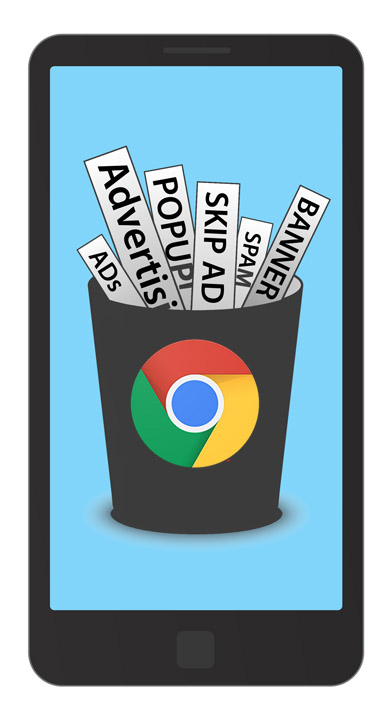 Chrome Ad Filtering – Do publishers need to fear it?

Starting on February 15, 2018, the widely used and Google-owned Chrome browser is going to filter out ads on websites with an “annoying experience.” This so-called Chrome Ad Filtering feature could have a significant impact on some sites and might leave many others untouched.

When does Chrome Ad Filtering apply to your website?

Many articles about this new behavior make it sound as Chrome Ad Filtering was an ad blocker built into the browser by default. It is not.

Chrome Ad Filtering doesn’t remove ads from your website automatically. Instead, Ad Filtering is bound to a first manual review. This workflow matches the approach Google also has when reviewing sites for AdSense or fine-tuning search results.

I could imagine that Google uses some indicators to detect possible annoying ad behavior, which might then put up your website for a manual review. There is no public information about how long the list of sites waiting for a review or how big the team is.

Google already reviews sites and sends out warnings including deadlines to remove the issue.

Once they reviewed your site, you can see the result in the Search Console (more below). You are going to receive a warning if your site failed the ad review. After fixing the reason for the issue, you can submit your site for a follow-up review. If you don’t resolve the problem then Chrome is going to block ads on your website.

Blocking all or annoying ads?

One of the most significant questions is whether Chrome blocks all or only the annoying ads on the website.

If our site was reviewed and classified as having an “annoying ad experience”, and you don’t fix the issue and submit it for another review, Chrome is using the same technique as ad-blockers and is going to block all files that match a list of patterns in the so-called EasyList. This blocks most codes from ad networks, but also other files that contain words like ads, banner or 300×250in the path.

Internal image ads or custom codes might still work. You can also follow our advice about dealing with ad blockers here.

Visitors to your website are going to see information about ads being blocked and can choose to disable the Ad Blocking feature.

What is an “annoying ad experience”?

Google is talking about fixing an “annoying ad experience” with this new ad filtering feature. What do they mean by that?

The rules are made by the Coalition for Better Ads. It not only includes Google, but also other ad networks, big publishers, and tech providers. It is likely going to have an impact on the whole industry and is not something Google implemented alone. With their Chrome browser, they control the power to enforce it, though.

The Better Ads Standards are explained with examples here.

Please notice, that non-ads are ok. If you show a PopUp with a newsletter signup form, as many users of our PopUp and Layer plugin do, these rules don’t apply to you.

Where can I find the Ad Experience Report?

You can find the result of the ad review for your website in your Search Console account. The Search Console is an interface for webmasters where they can find information about their site’s performance in the Google search results and issues related to it.

Once you are logged in to your Search Console account, navigate to the Web Tools item in the top left menu. 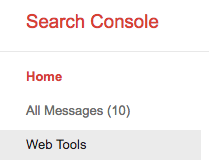 At the top of the page, you will find the Ad Experience Reports separated into Desktop and Mobile. 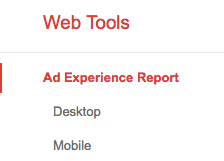 Most sites will just see the Status: not reviewed information for now since reviewing is a manual process.

Even though I don’t wish any publisher to have an issue listed after being reviewed, I am looking forward seeing how this page is going to look like.

There is a preview in this video showing that they are even going to have videos of the annoying ads included in the reports.

Aside from the already mentioned not reviewed status, there are four more.

Passing – your site was reviewed and is ok, nothing to worry regarding annoying ads

Warning – your site was reviewed and contains one or more bad ad experiences, which you should fix and then submit a new review

Failing – same as Warning, but in this case, Chrome is going to filter ads on your site if you don’t remove the annoying ones and submit a new review in time

Review pending – you submitted another review. Chrome Ad filtering might be paused

How can I fix a failing ad experience?

Once your site is reviewed and your site is in Failing status, you need to remove the ads that lead to the “annoying ad experience”.

Even though the ad review is done only on a few URLs on your site and only these URLs might be listed, you should remove the ads in question from all URLs where they behave the same.

The review team checks mobile and desktop sites individually, which means that you might have an issue on mobile, but not on desktop or vice versa.

I could imagine that one of the most common and honest mistakes these reviews are going to bring to light is an ad setup that was made with desktop in mind covering content on mobile, because the publisher forgot to check.

Hence, I always recommend creating a different ad setup on mobile and desktop or even by browser size.

At least, Chrome is only filtering ads on the version of the website where the issue is reported for, so mobile or desktop, but not necessarily on both.

When the status of your site changes, especially from ads being filtered to the unfiltered status again, it might take up to 8 hours until every visitor using Chrome can see ads again.

Don’t try to cheat by only fixing the issues on URLs they reviewed. Based on the manual, their follow-up review is based on other URLs and might even result in more and newly discovered problems.

You can submit two reviews without delay. If your site stays in Failing status after the second review then you can only submit the next one after waiting 30 days.

You can find an example of the review cycle on this page.

Why is this a good feature?

Chrome Ad Filtering is going to result in the loss of many ad impressions and hence potential revenue. That doesn’t sound like something publishers would welcome. I read comments from publishers saying that since AdSense doesn’t use any of these formats, they might just use Chrome’s market share of over 50% to force more publishers into AdSense.

I cannot argue with that position. The official reason for enforcing the Better Ads Standards is the growing number of users with an ad blocker. The initiative’s research has shown, that users are ok with ads in general and install ad blockers only because of annoying formats. As a result, they also don’t see ads they might enjoy or at least be ok with.

The ad-blocker-issue seems to hit Google so hard, that they are not only going to block annoying ads in Chrome, but all ads on the website, which does explicitly include less-annoying AdSense ads.

Publishers who make a living from ads would benefit from less ad block users, too.

I am still not convinced of what some ad networks hope for, that the money spent on annoying formats is moving back to allowed formats again, hence increasing competition on ad space and prices. Most publishers using the so-called annoying formats now didn’t start using them in the first place. They felt pressed into this decision not least due to the decrease in ad revenue from standard formats and the shift from more desktop to mobile visitors.

In worse case scenario, it might even happen that some publishers just ignore the warnings and show more ads to visitors with other browsers to compensate the loss from Chrome. Maybe, we start seeing messages like

The similarity to messages displayed to ad-block-users is intended. I fear that the result will be similar and the warning either ignored or the user switches to another website.

As a publisher myself, I know that some of the annoying ads can pay very well. We decided to remove those formats some time ago, anyway. Instead, we ran a lot of split tests for ad sizes, positions and networks to get the most out of standard formats.

It didn‘t surprise us that the ad networks with more aggressive formats were often also the once being most unreliable regarding availability, slowing down our websites, and showing inappropriate content, so I don’t regret that decision for the sake of the project.

If you are using our PopUp plugin, you might want to use the option to show it on exit only or replace it with a sticky ad.

Users of our Sticky Ads plugin should make sure that the ads don’t cover more than 30% of the visible space. Use smaller sizes on mobile or based on the browser width.

It is a good time to read our advice about dealing with ad-blockers, since the technique used by Chrome is the same.

We are still gathering information, so if you believe you have a question or information not covered here, then please let us know.

And don’t forget to create an account with Google’s Search Console, if you haven’t done so already.