OAKLAND — Through connections made at summer camp, high school students Aarvu Gupta and Lili Sun used artificial intelligence to create a drone program that aims to detect wildfires before they spread too far.

Rebekah Agwunobi, a rising high school senior, learned enough to nab an internship at the Massachusetts Institute of Technology’s Media Lab, working on using artificial intelligence to evaluate the court system, including collecting data on how judges set bail.

Both projects stemmed from the Oakland, Calif.-based nonprofit AI4All, which will expand its outreach to young under-represented minorities and women with a $1 million grant from Google.org, the technology giant’s philanthropic arm announced Friday.

It’s also one of the more disputed parts of technology. The late astrophysicist Stephen Hawking and Tesla CEO Elon Musk have warned human civilization is at risk from the unfettered development of artificial intelligence, which could lead to autonomous weapons of terror. Such fears led staff at Google earlier this year to press the company to halt a drone contract with the Pentagon.

The technology, still in its early stages, has also been decried for built-in racial bias that can amplify existing stereotypes. That’s particularly worrisome as more companies use it for decisions like hiring and police leverage artificial intelligence-powered software to identify suspects. MIT Media Lab researcher Joy Buolamwini, who is black, found facial recognition software could more easily identify her face when she wore a white mask, a result of algorithms that relied on data sets of mostly white faces.

Three years ago, Google apologized after its photo identification software mislabeled black people as gorillas. Microsoft did the same after users quickly found a way to get an artificial intelligence-powered social chatbot to spew racial slurs.

Tess Posner, the founder of the nonprofit organization AI4All, said the problem is made worse by the fact that minority groups like women and people of colour have historically been left out of the tech industry, particularly in AI.

“We need to have people included that are going to be impacted by these technologies, and we also need inclusion to ensure that they’re developed responsibly,” Posner said. “(Bias) happens when we don’t have people asking the right questions from the beginning.”

Despite stated efforts to attract more women and more people of colour, Google, Facebook and other big tech giants have been slow to diversify their staff and they’ve failed to hire many women of colour. African-American and Hispanic women make up no more than one percent of Silicon Valley’s entire workforce.

AI4All, launched in 2017, is based on a two-week summer camp program out of Stanford University.

Since then, AI4All’s resources have expanded across the country. In its first year, there were only two summer camps at Stanford University and UC Berkeley. This year it added four more at Carnegie Mellon, Princeton, Boston University and Simon Fraser University.

All of the camps are aimed at high school students who are women, people of colour or low-income.

Part of Google.org’s grant will go towards opening more AI4All camps. The ultimate goal is to use the money to create a free, online AI curriculum course that will be accessible to anyone in the world. A course is already in the works.

“We really need for AI to be made by diverse creators, and that starts with people having access to the learning opportunities to understand at its core what AI is and how it can be applied,” Google.org’s AI4All partnership lead Hannah Peter said.

In addition to providing summer camps, AI4All also offers three-month fellowships where students can develop their own projects and pitch them to AI experts in the industry, as well as funding for their students to launch independent initiatives.

One such initiative was AI4All alumnus Ananya Karthik’s workshop, create, which uses artificial intelligence to create artwork. Karthik gathered a few dozen girls on a sunny Monday afternoon at Oakland’s Kapor Center to show them how to use the Deep Dream Generator program to fuse images together for a unique piece of artwork.

Other AI4All students, most of whom are still in high school, have turned their newly acquired technical skills towards current pressing issues, like the wildfire project developed by Gupta and Sun, from AI4All’s 2017 and 2016 class, respectively. The two met during one of the AI4All’s three-month fellowships this year. This idea came out of the Napa and Sonoma County fires that plagued northern California late last year. 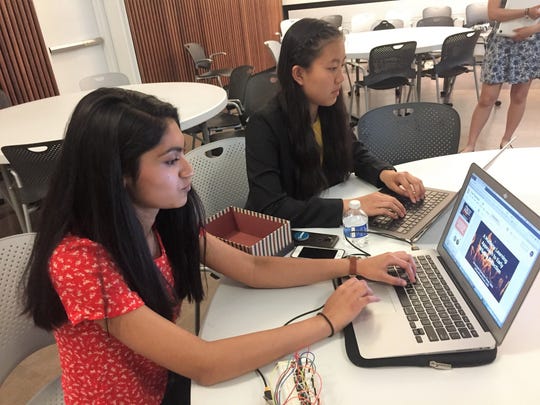 AI4All alumni Aarvu Gupta and Lili Sun developed a drone program that can identify wildfires before they spread too far. (Photo: Ashley Wong)

The camps validated their interest in STEM careers. They also appreciated the camp’s talks featuring real-world examples of minority women who were able to succeed in the industry.

“I want to initiate change using artificial intelligence,” Sun said. “I don’t want to be just working on an iPhone or something like that … (AI4All) gave me real examples of people who’ve succeeded, which is pretty cool. I knew that I could do it.”

Because of her experiences, Gupta said, she’s looking forward to exploring a career in AI, particularly in its uses for health and medicine. She’s already putting that interest to work with her internship this summer at UC San Francisco, where the lab she’s working at is doing research on the increased risk factors for women in developing Alzheimer’s disease.

Amy Jin, an AI4All 2015 alumni and a rising freshman set for Harvard University in the fall, said the program opened her eyes to all the possibilities of AI as a tool for solving real-world problems.

Using surgery videos from UCSF, Jin, along with one of her AI4All mentors, developed a program that can track a surgeon’s tools, movements and hand placement to give feedback on how to improve their technique.

For Agwunobi, AI4All was instrumental in showing her how she could combine her passion for activism and social justice with her interest in technology.

At her MIT internship, Agwunobi took data gathered during the pre-trial process to evaluate how key figures like judges behave while setting bail. The goal is to arm activists with this data when pushing for bail reform and scaling back mass incarceration.

“You can work with tech and still be accountable to community solutions,” Agwunobi said. “(AI4All) affirmed my desire to solve interesting problems that actually helped communities I was accountable to, rather than making me feel like I was selling out … I think that’s how I want to approach solving humanitarian problems in the future.”

OPINION: No light at the end of the tunnel for engineering exports