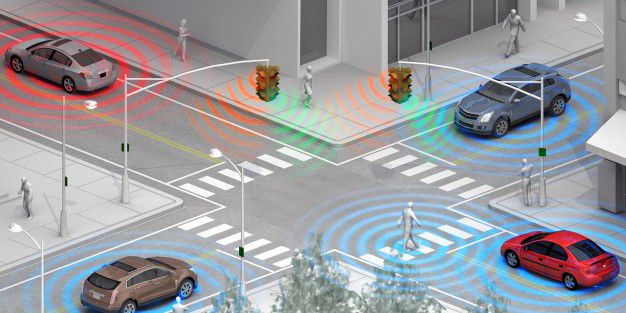 Automakers have reached a fork in the road when it comes to deciding how to connect cars so that they can eventually transmit potentially life-saving safety information to each other in real time. For decades, car companies and researchers have been developing vehicle-to-vehicle (V2V in industry parlance) systems on the backbone of dedicated short-range communications (DSRC) for these time-critical messages. The federal government has even drawn up proposed regulations that would mandate the inclusion of these DSRC-based systems in all new cars. But the proposal has languished. Meanwhile, some car companies and major suppliers have been exploring how advances in cellular technology–culminating in the advent of 5G–may do the job better.

That’s subject to ongoing debate, but the efforts of believers in the burgeoning cellular route gained renewed traction this week at the 2018 Mobile World Congress in Barcelona, Spain. There, two major automakers and Qualcomm, perhaps the biggest proponent of cellular, announced the latest collaborations that could shape the way the transportation industry executes communications among cars, pedestrians, and infrastructure, collectively now known as vehicle-to-vehicle (V2X) communications.

While the sensors being developed for autonomous cars can only detect the road environment within their lines of sight, these V2X communications are expected to one day provide information on what lies beyond and around the corner, whether that’s icy spots, potholes, traffic jams, or even information on other vehicles that might do something dangerous, like running a red light. This critical information can be transmitted as often as 10 times per second.

Qualcomm said it will host a cellular V2X demonstration with the PSA Group, the parent company of brands including Citroën and Peugeot, in France this month. That extends a yearlong trial the two companies have shared since February 2017. Further, BMW said it will partner with Qualcomm in similar trials, with Maik Böres, head of the automaker’s future mobility team, saying cellular V2X is “a natural solution.” The expansion into Europe has crystalized Qualcomm’s global role promoting the cellular approach. The company has already tested cellular V2X in Korea, China, Japan, and in trials that started in San Diego last year. Its current-generation cellular V2X chipsets are already slated for commercial use in both roadside units and production vehicles in 2019. That’s a frenzy of activity for cellular testing after nearly two decades of waiting for DSRC to bear fruit.

“Because previous technologies have been incumbents for a long time, there’s been a lot of inertia,” says Nakul Duggal, vice president of product management in Qualcomm’s automotive division. “When we talked about V2V five years ago, we were not thinking of modems. The technology was not aligned with where the rest of the car was going. Moving into the next decade, all cars will have a modem, and now it’s just an incremental cost. Automakers are picking up on that.”

Better known for its rise to prominence in the mobile-phone market, Qualcomm has quietly become a major supplier to the automotive industry. Its first work on cars came in 2002, according to Duggal, when Qualcomm engineers worked with General Motors on its OnStar connected-car system. Over time, Qualcomm’s Snapdragon processors have become a fixture in the infotainment systems of 14 OEMs and suppliers, and the company has also developed wireless charging technology that could help electric vehicles charge while remaining on the road.

Cars May Soon Have Multiple Modems

From those early days of OnStar, the industry has evolved, with automakers now offering 4G LTE connections to customers. Global consulting firm Strategy Analytics says the percentage of new vehicles sold with embedded cellular connectivity will grow from 20 percent in 2015 to 75 percent by 2024. Qualcomm intends to benefit from that growth—and already has; the company says it secured more than $3 billion in new orders last year for its automotive business.

The recent announcements in Barcelona were only the latest examples of the company’s growing prominence. Back at CES in January, Qualcomm announced new deals with Chinese carmaker BYD, Honda, and Jaguar Land Rover to provide its next-generation infotainment components, the latter of which generated particular interest because Qualcomm will actually integrate multiple modems into its JLR products. For now, that’s a perk only luxury-brand buyers will see, but it reflects that both automakers and consumers are interested in the technology and that their interests don’t necessarily overlap.

Car companies want connections to vehicles to provide software updates, to harvest data, and to manage warranty claims, even before they’re needed for more mission-critical uses in self-driving cars. Consumers, meanwhile, want modems designed to care for their infotainment needs, from streaming music to letting kids watch multiple movies on the rear screens in family minivans. Demand for faster connections is expected to grow over the long term as automated driving systems free up motorists to both work and relax in their vehicles.

“We are finding ourselves in this very interesting place,” Duggal said. “Automakers are realizing they need a more sophisticated way into the car for over-the-air updates and high-definition maps. At the same time, the use of consumer data keeps increasing, and at some point, automakers will say, ‘I don’t want to subsidize this for consumers.’ This shows you how rich a platform the car is becoming, and how complex the automotive use cases are going to be with where the next level of innovation is going to go.”

Qualcomm also made some big splashes at CES this year, where Ford and Qualcomm announced a partnership to study cellular V2X technology. That may have been a significant victory in the push to promote cellular. As recently as April 2017, Ford was telling federal regulators that it agreed that “DSRC is the only proven communication technology currently available that meets latency and availability requirements” for these systems. Only eight months later, Don Butler, Ford’s executive director of connected vehicles, said that technologies including 5G and cellular V2X are “fundamental to support our vision for connected cars.”

Qualcomm’s cellular V2X chips are expected to be deployed commercially next year, and Duggal says they could be underpinned by 5G technology to be commercially deployed by 2021. In vehicles, Duggal says, 5G will give these connected systems longer range, better reliability, and lower latency than either DSRC or the LTE-based systems in today’s cellular V2X chips. Should its products underpin the arrival of 5G in automotive uses, Qualcomm’s role in the industry will only expand. A 2017 report from consulting firm IHS Markit suggests that 5G connectivity may enable $2.4 trillion in economic output across the automotive sector by 2035.

Beyond the financial potential, Duggal says, the opportunity to drive down the number of deaths occurring on American roads is his major motivation. “This is a safety application at the end of the day, and automakers actually want to see this,” he says. “Every car sold is going to have a modem, and our approach is to make it part of the modem. A lot of accidents are caused by poor weather conditions or sudden changes in other conditions. They’re very avoidable. From a road-safety perspective, this could definitely have a major benefit.”