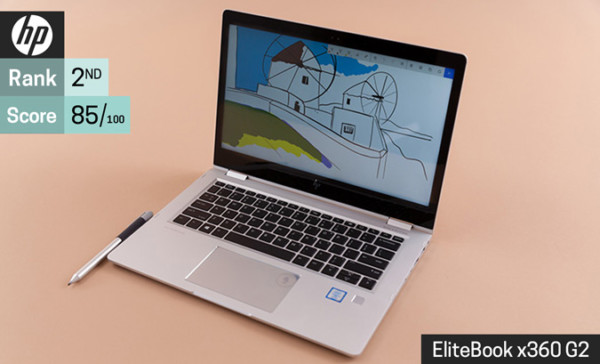 HP had a strong, second-place showing in this year’s rankings, jumping from fourth place last year. A combination of very good overall review scores, great design and a wide variety of laptop options for every price range helped HP shine. While we recommended every HP laptop we tested, the company received fewer Editors’ Choice awards than first-place Lenovo.

HP boasts an impressive and diverse lineup filled with attractive consumer products like the Spectre line, powerful ZBook and EliteBook workstations, and colorful budget systems like the Stream 14. The company’s laptops got a strong average rating of 3.7 out of 5 stars during our evaluation period, with a full seven out of 22 products receiving our coveted Editors’ Choice award. Not even one HP laptop scored below 3 stars. (Below 3 means “Don’t buy this.”)

Some standout products include the HP Envy 13t, a lightweight consumer notebook that provides an awesome typing experience and long battery life for under $900; the powerful and attractive HP Omen 17; and the sleek HP EliteBook x360 2-in-1 for business users. HP also had a few major disappointments, such as the high-end HP Spectre 13, which is superthin but has weak battery life, and the HP Omen 15t, which suffers from a dim display, a shallow keyboard and sluggish transfer speeds.

We praised the Envy x360, EliteBook x360 1020 G2 and Spectre x360 for their sleek, silver aluminum chassis as well as their sturdy 360-degree hinges that allow each system to gracefully transform. And when it comes to workstations, you’ll be hard-pressed to find anything prettier than the ZBook 14u G4 or the ZBook 15 G4, which serve up elegance mixed with MIL-SPEC-tested ruggedness.

True, HP has a few MacBook-inspired notebooks in the mix like the EliteBook 1040 G4 that try to out-Apple Apple, but then there are mold-breakers like the Spectre 13 (8th Gen Core) and the Spectre x2 with their barely there dimensions and copper accents. The company also retooled the gamer-centric HP Omen 15 and 17, giving them a daring design that distracts from the use of plastic. Speaking of plastic, HP does have a few cheap-looking clunkers in the lineup, like the Notebook 15-ba009dx, but the company has never been afraid to use color to make up for less-than-premium construction, as seen in the Stream 14.

In our testing, HP’s tech support proved helpful, but not in every channel. Whereas the company’s web and social agents provided correct information, its phone-based reps were less helpful, delivering multiple incorrect answers and repeatedly pushing us toward its paid subscription service to get answers.

HP’s warranties offer varying shipping and terms of support depending on which model you choose. Most models come with a one-year warranty, and some come with free shipping for laptops getting serviced, but HP’s cheaper models don’t offer such shipping protection.

One of HP’s biggest achievements in 2017 was an overhaul of the Omen gaming lineup, with beautiful displays and upgradable specs.

More recently, the ZBook x2 reinvented 2-in-1 devices aimed at creative types by adding a Wacom stylus and a 4K matte display. HP also launched the Envy x2, one of the first machines to feature Windows on Snapdragon.

HP’s range of laptops for different prices and purposes is impressive. If you need something really cheap, you can always go for the $220 HP Stream or something in the $400 range, like a Pavilion x360 2-in-1.

Perhaps our favorite HP value is the Envy 13t, falling in an $850 sweet spot with an amazing design, a stunning keyboard, long battery life and a Core i7 CPU.

The top-shelf Spectre line includes beautiful, powerful 2-in-1s like the Spectre x360 and a stunningly designed clamshell in the namesake Spectre, with the latest Intel Core CPUs.

HP’s business notebooks, like the EliteBook x360 G2, bring features such as the Sure View privacy screen and are also well designed. The company also took its Omen gaming line to the next level, adding stunning new designs and some compelling sub-$1,000 models.