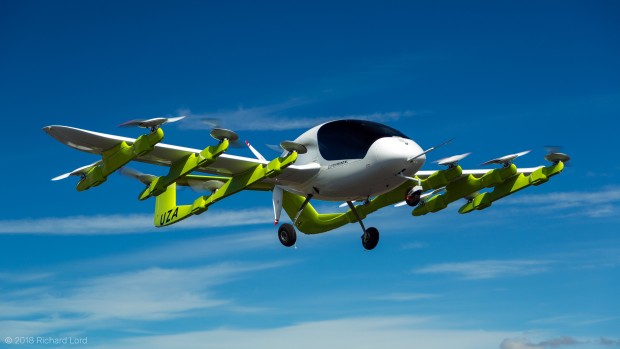 A new air taxi service financially backed by Google cofounder Larry Page is set to take off in New Zealand, thanks to an agreement announced this week.

Page’s Kitty Hawk company, the developer of a new autonomous flying machine called “Cora,” will begin testing the service in rural Canterbury, a region in the South Island, according to Hayden Munro, press secretary for Megan Woods, New Zealand’s minister of research, science and innovation.

The electric air taxi can carry two passengers. It is designed to take off like a helicopter, and it uses proprietary software to fly like a regular fixed-wing aircraft, with the help of some human supervision.

Zephyr Airworks, Kitty Hawk’s New Zealand affiliate, has been working with government officials on plans to test the new service as part of a program meant to encourage science and innovation in the country.

Kitty Hawk CEO Sebastian Thrun was the founder of Google X, where he led the development of self-driving cars, Glass and other key projects. Zephyr Airworks CEO Fred Reid was the founding CEO of Virgin America, as well as former president of Delta Air Lines and Lufthansa Airlines.

“International innovators are finding our unique expertise, resources and talent, together with our size and location, offer surprising advantages when it comes to turning ideas into reality,” said Woods.

The electric-powered Cora aircraft is designed using 11 independent lift fans, which allow the plan to take off vertically like a helicopter. It has a wingspan of 36 feet. The aircraft can fly at altitudes ranging from 500-3,000 feet at speeds of up to 110 miles per hour. It has a range of 62 miles.

Long Horizon
The Cora aircraft has been in development since 2010. The company so far has obtained experimental airworthiness certificates both from the New Zealand Civil Aviation Authority and the Federal Aviation Administration in the United States.

Development of a viable air taxi service has been a hotly pursued goal for several major companies in the U.S. and elsewhere in recent years, due to a combination of factors. Airways used for key commercial aviation purposes have become congested. Infrastructure problems have worsened. The lack of high-speed rail transportation in the U.S., accidents and delays plaguing traditional rail systems, and snarled traffic on many highways have fueled efforts to come up with practical alternatives.

Uber has been working with Bell Helicopter on an autonomous air taxi service that it hopes to roll out in the U.S. by 2025. The companies earlier this year previewed a model aircraft at CES.

Vahana, an all-electric autonomous air taxi from Airbus affiliate A3, earlier this year completed a successful 53 second test flight at the Pendleton UAS Range in Oregon, reaching a height of 16 feet.

Fully autonomous air mobility is still about a decade away, according to Zach Lovering, project executive for Vahana at A3.

“Today we feel we’ve discovered many of the key constraints to enabling these type of vehicles,” he told TechNewsWorld. “Our main focus now, besides product development, is working with regulators to ensure a path to certified, self-piloted operation.”

Regulatory Environment
The main obstacle to getting air taxi services off the ground is creating an air traffic control system that can monitor traffic in cities as well as in more rural areas, where low-flying drones, business helicopters and other small aircraft are competing for airspace, observed Rob Enderle, principal analyst at the Enderle Group.

“In certain areas, where they don’t have subways or elevated trains, an air taxi would be far quicker,” he told TechNewsWorld.

Air taxi services would have to be set up to take off and land at designated pickup and dropoff points, and the artificial intelligence technology would have to be tested to make sure it could safely navigate urban corridors, said Paul Teich, principal analyst at Tirias Research.

“That will be different than testing human pilots,” he told TechNewsWorld.

Despite the high interest in development, the business case for fully autonomous air taxis is not as strong as one might think, suggested Steven Polzin, director of mobility policy research at the University of South Florida’s Center for Urban Transportation Research.

“For passenger air travel, particularly commercial air travel, the labor cost associated with pilots is relatively modest in the context of total cost of providing the trip,” he told TechNewsWorld, “which dampens the motivations to go to full automation.”