While Microsoft Garage is a great opportunity for employees to innovate on their passion projects, it is also a smart value creation tool for the company. Here’s a peek inside Microsoft’s Garage project and its newly launched India chapter.

The word Garage brings to mind a typical automobile workshop. Spanner’s here, pliers there, sockets and screws strewn about; a place where sleeves are rolled up and hands are dirtied. The modern Garage, as conceived by Microsoft is all that, albeit with the latest tech tools. It is also Microsoft’s way of leveraging and encouraging in-house talent to create problem-solving technology which can also possibly end up in the hands of a consumer.

The concept of Garage is not new for Microsoft. In fact, the Garage initiative has existed since 2014. It is only now though, that a Garage space has been openedat Microsoft India’s Hyderabad campus where 4,000 plus employees will get to test and develop their ideas. Collaboration is key to the concept of Garage and not only will Microsoft’s Hyderabad employees get to work within local teams, they will also have the opportunity to interact and collaborate with Garage teams across 7 other locations in the world. Microsoft Garage spaces are currently located in Silicon Valley, Redmond, Vancouver, Washington, New England, Israel, and Beijing. Another Garage space is coming up at India’s technology capital, Bengaluru. The Garage at Bengaluru will be completed later this year and Microsoft plans to provide similar prototyping, fabrication and other IoT development tools at the facility. 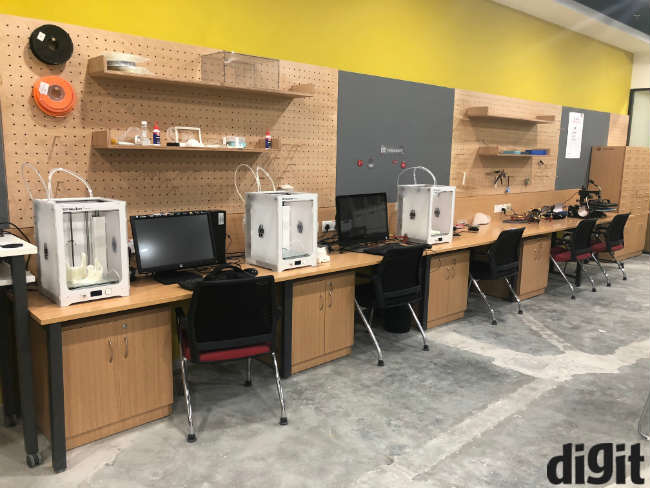 The Garage brings with it specialised equipment such as 3D printers, laser cutters, PCB milling machines and more, but it’s not just an overhyped maker space. Microsoft plans to hold multiple training workshops and tech TED talks of sorts, to help those working on Garage projects further expand their skills and knowledge base.

The Value of An Idea

While the Garage does prove to be a great resource in terms of infrastructure support and guidance, Microsoft employees work on these projects in their own sweet time, beyond traditional work hours. “We at Microsoft have very flexible concepts on working hours, so it’s very difficult to define office hours per say, people are more responsible for the impact they create with the work that they do, so what ends up happening is as long as they are doing their day jobs well, nobody questions them as to whether they are sitting in a Garage at 10AM or 6PM,” says Reena Dayal, Director, Microsoft Garage – India.

While flexible work hours definitely give creators a chance to dedicate quality time to their “passion projects”, as Microsoft calls them, the entire Garage concept can be viewed as a smart strategy to grow innovative products and services under the Microsoft umbrella, at no extra cost. Although, employees are granted patents for the work that they do, the end beneficiary is the company since most of these projects are in one way or the other integrated within Microsoft’s own ecosystem of products. Take for instance Bing Translate, a feature which allows users to translate content on the Bing browser in various languages. The project was worked upon by a Garage team made up of Indian employees and is now available to millions of Bing users. Other Garage apps that have made their way to Android or iOS also display Microsoft as the developer. Productivity apps and services that have emerged from Garage now have millions of downloads collectively. The point here is that Microsoft has a lot to gain from these employee passion projects.

“In many cases, people’s passion projects have turned into their day jobs because they’ve gotten momentum,” says Jeff Ramos, General Manager, Microsoft Garage. He tells us that in many cases Microsoft goes ahead and funds Garage teams that display good potential. “If a project has good business value, it may end up fully funded and function as a startup within the organisation. The support for the process itself comes from people who are very experienced and understand the market. For example, if a dipstick is required for a project, to see if the right kind of features are being developed, there are people in the global Garage team who help teams do that dipstick,”explains Dayal.

Hackathons are also big at Microsoft Garage. These week-long hackathons allow Microsoft employees across the world to work on their ideas together. The best ideas are then handpicked by Garage leaders and the winning team is sent to the company’s Redmond headquarters to meet with senior leadership and take their projects to the next level – the ship channel (going to market). 18,000 Microsoft employees participated in the 2017 Garage hackathon. 65 Garage projects went to the ship channel in the year of its inception, followed by 40 in its second year. Over 30 project finally ended up becoming formal products or services. “What we learnt is that we want projects that are more likely to have an impact so we were more discerning over the years in terms of projects that we wanted to bring to market.,” Ramos tells Digit.

Hackers, Facebook will now reward you for this as well