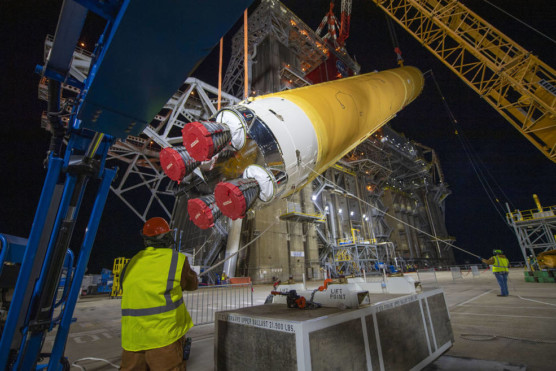 All eyes are on south Mississippi with this month’s delivery and installation of NASA’s Space Launch System (SLS) rocket’s first core stage to Stennis Space Center for a milestone Green Run test series before its Artemis I flight.

The Green Run testing are going to be the primary top-to-bottom integrated testing of the stage’s systems before its maiden flight. The testing are going to be conducted on the B-2 Test Stand at Stennis, located near Bay St. Louis, Mississippi, and therefore the nation’s largest reaction propulsion test site. Green Run testing will happen over several months and culminates with an eight-minute, full-duration hot fire of the stage’s four RS-25 engines to get 2 million pounds of thrust, as during an actual launch.

“This critical test series will demonstrate the rocket’s core stage system is prepared for launch on missions to region ,” Stennis Director Rick Gilbrech said. “The countdown to the present nation’s next great era of space exploration is moving ahead.”

NASA is building SLS because the world’s most-powerful rocket to return humans to region , to such destinations because the Moon and Mars. Through the Artemis program, NASA will send the primary woman and next man to the Moon by 2024. Artemis i will be able to be a test flight without crew of the rocket and its Orion spacecraft. Artemis II will carry astronauts into lunar orbit. Artemis III will send astronauts to the surface of the Moon.