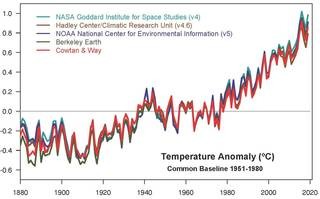 According to independent analyses by NASA and therefore the National Oceanic and Atmospheric Administration (NOAA), Earth’s global surface temperatures in 2019 were the second warmest since modern recordkeeping began in 1880.

Globally, 2019 temperatures were second only to those of 2016 and continued the planet’s long-term warming trend: the past five years are the warmest of the last 140 years.

This past year, they were 1.8 degrees Fahrenheit (0.98 degrees Celsius) warmer than the 1951 to 1980 mean, consistent with scientists at NASA’s Goddard Institute for Space Studies (GISS) in ny .

“The decade that just ended is clearly the warmest decade on record,” said GISS Director Gavin Schmidt. “Every decade since the 1960s clearly has been warmer than the one before.”