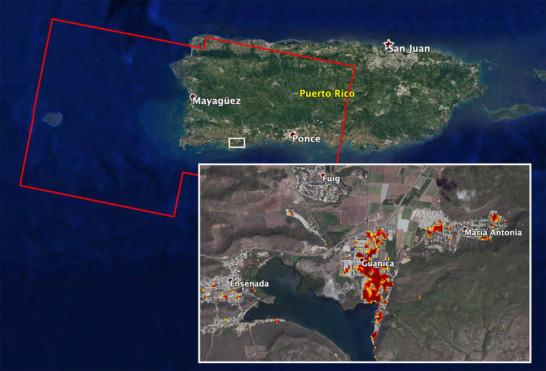 Since a magnitude-6.4 earthquake struck Puerto Rico last week, aftershocks near its southwestern coast are relentless. The frequency and intensity of the aftershocks still cause damage on this already-vulnerable a part of the island.

NASA scientists are helping local and federal agencies assess the extent of that damage. Using synthetic aperture radar data from the Copernicus Sentinel-1 satellites operated by the ecu Space Agency (ESA), the Advanced Rapid Imaging and Analysis (ARIA) team at NASA’s reaction propulsion Laboratory and Caltech in Pasadena, California, created a replacement damage map that has the southwestern coast near the most quake’s epicenter.

The ARIA team compared post-quake satellite data acquired on Jan. 14 with data as far back as Sept. 2019 to supply the map. the colour variation from yellow to red indicates increasingly significant damage. Their analysis shows that Guanica, west of the town of Ponce, was particularly hard hit.

The map covers a neighborhood of 107 by 47 miles (172 by 76 kilometers), shown with the massive red polygon, with each pixel measuring about 100 feet (30 meters) across. the info is most sensitive to putting together damage instead of small-scale changes or partial structural damage. it’s also less reliable over heavy vegetation. Even with these limitations, the map can still serve a crucial role in identifying the areas which will need help the foremost.