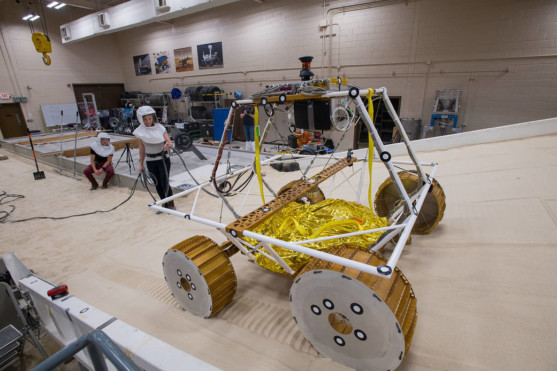 An engineering model of the Volatiles Investigating Polar Exploration Rover, or VIPER, is tested within the Simulated Lunar Operations Laboratory at NASA’s Glenn research facility in Cleveland, Ohio. About the dimensions of a golf cart, VIPER may be a mobile robot which will roam round the Moon’s South Pole trying to find water ice within the region and for the primary time ever, actually sample the water ice at an equivalent pole where the primary woman and next man will land in 2024 under the Artemis program.

The large, adjustable soil bin contains lunar simulant and allows engineers to mimic the Moon’s terrain. Engineers from NASA’s Johnson Space Center in Houston, where the rover was designed and built, joined the Glenn team to finish the tests. Test data are going to be wont to evaluate the traction of the vehicle and wheels, determine the facility requirements for a spread of maneuvers and compare methods of traversing steep slopes. Respirators are worn by researchers to guard against the airborne silica that’s present during testing.

VIPER may be a collaboration within and beyond the agency. NASA’s Ames research facility in Silicon Valley is managing the project, leading the mission’s science, systems engineering, real-time rover surface operations and software. The rover’s instruments are provided by Ames, NASA’s Kennedy Space Center in Florida and commercial partner, Honeybee Robotics in California. The spacecraft, lander and launch vehicle which will deliver VIPER to the surface of the Moon are going to be provided through NASA’s Commercial Lunar Payload Services program, delivering science and technology payloads to and near the Moon.