Researchers Have Invented an Awesome And Scary Nuclear Battery Pack

Batteries powered by radioactive materials have been around for more than a century, but what they promise in power they usually lose in bulk.

Not so with a new kind of power source, which combines a novel structure with a nickel isotope to pack ten times more power than an electrochemical cell of the same size. The only question is, are we ready to go nuclear?

A team of Russian researchers have put a new spin on technology that uses the beta decay of a radioactive element to create differences in voltage.

Your average electrochemical cell uses contrasts in the reactivity of various materials to build a difference in voltage potential.

This gives plenty of power for the volume of the battery, especially when using materials such as lithium.

But as we all know too well, batteries based on electrochemistry simply don’t last all that long. Sooner or later they need to be recharged or replaced.

The lifetime of a nuclear battery, on the other hand, is based not on its reactivity, but the half-life of its decay. Rather than being measured in hours or days, their potential lifetimes can be decades or even centuries.

So-called betavoltaic batteries were dreamed up way back in 1913. They aren’t at all like miniature nuclear reactors. Instead of producing heat, they get their charge from beta particles emitted by an isotope knocking electrons from another material.

Unfortunately this doesn’t exactly result in a torrential flood of power. To overcome this shortfall, the trickle of electrons could be fed into some sort of accumulator, such as a capacitor. It works, but it also adds to the overall bulk.

Given this sort of technology would be ideal for powering things you can’t (or don’t want to) access often – such as pacemakers or small satellites – added mass is something you’d want to avoid.

What’s more, the word ‘radioactive’ isn’t as charming as it was a century ago. Marketing a nuclear-powered pacemaker in today’s world would demand more than a catchy jingle; but this new approach might help tip the scales.

The devices is made of stacks of isotope of nickel-63 sandwiched between a pair of special semiconducting diodes called a Schottky barrier. 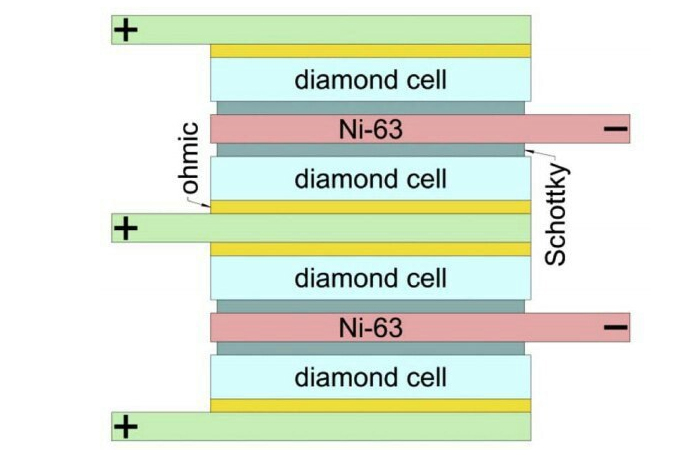 This barrier keeps a current headed one way, a feature often used to turn alternating currents into direct ones.

Finding that the optimal thickness of each layer was just 2 micrometres, the researchers were able to maximise the voltage produced by every gram of isotope.

Nickel-63 has a half-life of just over 100 years, which in an optimised system like this adds up to 3,300 milliwatt-hours of energy per gram: ten times the specific energy of your typical electrochemical cell.

It’s a significant step up from previous nickel-63 betavoltaic devices, and while it isn’t quite enough to power your smart phone, it does bring it into a realm of being useful for a wide variety of tasks.

“The higher the power density of the device, the more applications it will have,” says the director of the Technological Institute for Superhard and Novel Carbon Materials, Vladimir Blank.

For example, current generations of pacemaker are around 10 cubic centimetres in size, and use around 10 microwatts of power provided by a subcutaneous electrochemical battery.

Wireless charging through the skin could one day be a possibility, but for now they need to be replaced through an invasive surgical operation.

Pacemakers would be a whole lot simpler and safer if they had a power source that outlasted the patient, and a betavoltaic cell like this could be ideal.

But after an initial love affair with all things radioactive, public appeal has since flipped. Half a century of dealing with the threat of atomic war and fear of fallout has led to confusion and mistrust of the power of the isotope.

Even communicating the risks of radioactivity using innocuous comparisons does little to ease concerns over the potential impact of any material described as radioactive.

But for some, tiny nuclear powered devices would be the technology to invest in.

This research was published in Diamond and Related Materials.