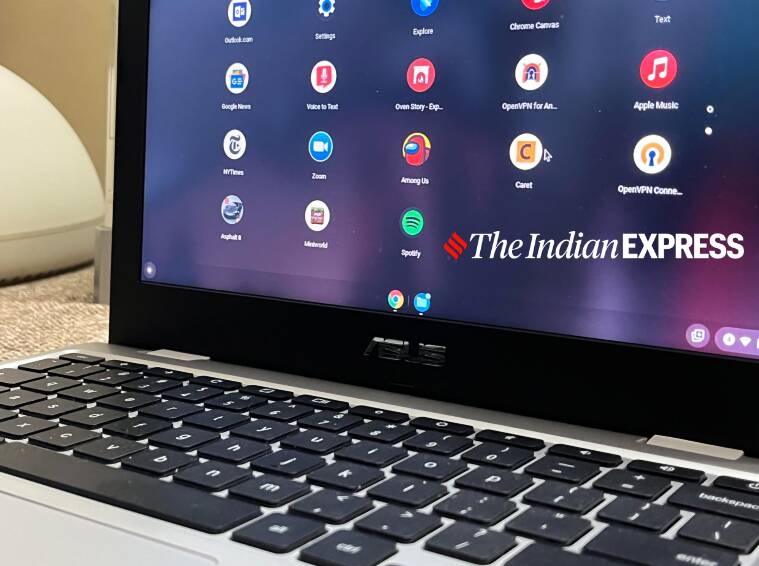 Review of the Asus Chromebook CX1101: Surprisingly decent for the price

Chromebooks received a lot of attention this year. Chromebooks benefited from the absence of competition from Windows notebooks in the entry-level segment, in addition to the push for online education. For the time being, Chromebooks are a hot topic, and companies like Asus want to take advantage of it. The Asus Chromebook CX1101 has a longer battery life, better acoustics, and is reasonably priced. Can I, nevertheless, use this Chromebook on a daily basis? Is Chrome OS appropriate for the work I do? Before I started using this device, I had a lot of identical concerns. The Asus Chromebook CX1101 is the subject of my review.

Review of the Asus Chromebook CX1101: Design and Aesthetics
The Asus Chromebook CX1101 is an exception to the rule of budget notebooks in terms of design. This Chromebook is stylish, with a silver(y) plastic lid and base. Don’t be deceived by the fact that it’s made of plastic. The notebook appears to be tough enough, and it is MIL-STD 810H certified, so it can take bumps, knocks, and scrapes. I wouldn’t mind taking this Chromebook on my next business trip because it’s so light and portable.

Review of the Asus Chromebook CX1101: Display and Speakers
I wouldn’t say the Chromebook CX1101’s display is its weakest point. The CX1101 offers an anti-glare 11.6-inch IPS non-touch screen. A screen resolution of 1366 x 768 pixels is used on the display. To be clear, the display isn’t razor-sharp, but it is bright and colorful. I’m able to read news stories, view Netflix episodes, and work on Google Docs. Some may consider the 11.6-inch screen to be too small, but it is great for those who need something portable, despite the display’s large bezels at the top and bottom. The webcam is also nothing special; it’s just a standard 720P camera that does the job.

I must say, the Chromebook CX1101’s audio is one of its strongest features. The stereo speakers impressed me after I spent some time viewing movies and listening to music on the CX1101. I discovered that the speakers can become very loud, which is a significant improvement above the audio output one would anticipate from a budget notebook. They lack the punch and the surround effect, however. But that’s all right.

Review of the Asus Chromebook CX1101’s keyboard and trackpad
The keyboard on Asus notebooks has vastly improved in recent years, and the CX1101 is no exception. This keyboard is comfortable to type on, has good travel, and provides just enough tactile feedback to ensure that typing is enjoyable and accurate. It’s also spill-resistant, however it doesn’t have a backlight. Also, the trackpad isn’t as large as it should be, but it’s still easy to use.

Review of the Asus Chromebook CX1101: Performance and Battery
In my testing, I discovered that the Chromebook CX1101 is ideal for most casual users or those who are just getting started with computers. I’m sure you can make the CX1101’s Intel dual-core Intel Celeron N4020 processor bog down if you push it hard enough. This is to be expected from a low-cost Chromebook. Anyone who is serious about power should be aware of the limitations of a Chromebook and explore an alternative – preferably a Windows notebook.

However, if you stick to the basics, such as web browsing, giving a presentation, and composing an assignment on Google Docs, the CX1101 won’t let you down. Switching between Chrome tabs was smooth in my testing, but when you push this Chromebook a little harder, performance suffers. Yes, you may download and install games from the Google Play Store on the CX1101. However, the performance varies depending on the game. I tried out a few games on the CX1101, and each game gave me a distinct experience. The Chromebook CX1101 is equipped with 4GB of RAM and 64GB of eMMC storage.

The CX1101 runs Google’s Chrome OS, which is a breath of new air if you’ve spent your entire life on Windows. Chrome OS differs from Windows in that it promises compatibility with Android apps, which are commonly found on smartphones. Sure, Chrome OS isn’t as adaptable as Windows, with many important software still missing, but it’s designed for a different set of consumers, which is why Google’s OS is so successful.

The Chromebook CX1101 has a longer battery life than Windows notebooks that cost significantly more. During testing, I was getting roughly 10 hours of real-world usage on a single charge. That’s excellent for a low-cost notebook.

Should you buy the Asus Chromebook CX1101?
During the pandemic, Chromebooks found a niche, something Google and its partners had hoped for — especially in a nation like India. The Chromebook CX1101 has a sturdy construction and a long-lasting battery. The screen is adequate rather than exceptional, and the device’s design is excellent. Chromebooks, in my opinion, are improving rapidly. Chromebooks are inexpensive, and because they cater to people who wish to utilize largely web apps and perform simple computing tasks, they operate well.