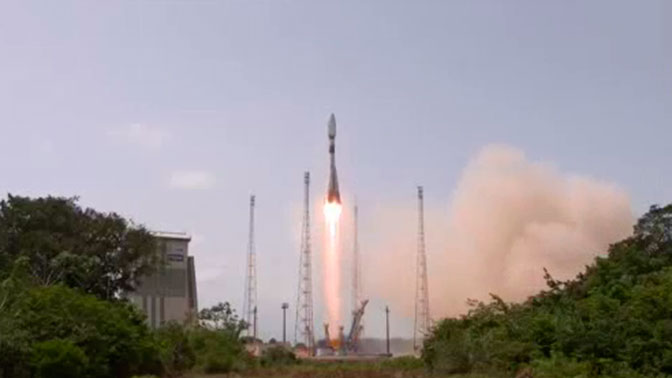 The Soyuz lifted off from the Guiana Space Center in Kourou, French Guiana at 12:10 p.m. EST (1710 GMT) after a 33-minute delay caused by bad weather. Despite the slow start, Arianespace had a flawless launch today. “The mission has been a total success,” Martin Halliwell, the chief technology officer for SES Networks, said in a post-launch briefing.

“Arianespace is delighted to announce that the four O3b satellites have been safely separated as planned on their targeted medium-Earth orbits,” Luce Fabreguettes, executive vice president of Arianespace, said in the briefing.

This was the second launch of the year for the European launch provider Arianespace — and a much-needed redemption following an anomaly during the last launch on Jan. 25, when the company lost contact with the upper stage of its Ariane 5 rocket shortly after liftoff. The three satellites aboard that rocket did reach orbit despite the anomaly.

Today’s launch was originally scheduled for Tuesday (March 6), but Arianespace postponed it to conduct extra checks. “This will enable additional checks as part of the resumption of launches from the Spaceport in French Guiana,” Arianespace wrote in a mission update on Monday (March 5).

Arianespace is less than two weeks away from its next launch. On March 21, the company plans to launch an Ariane 5 rocket with two communications satellites one for Japan and one for the U.K.