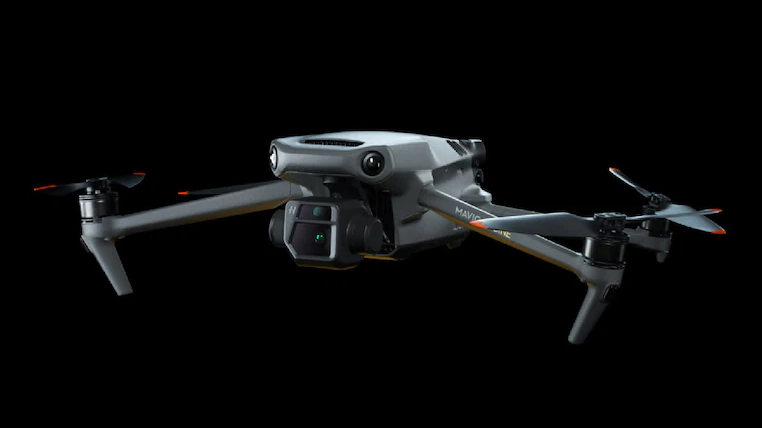 The DJI Mavic 3 has been introduced, with a flight time of 46 minutes and a price starting at roughly Rs 1.6 lakh.

DJI has released the Mavic 3 and Mavic 3 Cine camera drones. Both drones are successors to the company’s Mavic 2 Pro and Mavic 2 Zoom, and feature a Hasselblad-powered dual-camera system with 5.1k video recording. Of course, there are a slew of other enhancements and additions.

New support for Apple ProRes 422 HQ, a folding design, and up to 46 minutes of flight duration are just a few examples. The new camera drones are being hailed as one of the series’ most significant advancements in recent years. Let’s have a look at the specifications to see what’s on offer. But first, let’s take a look at the price.
Price of the DJI Mavic 3

DJI has set the price of the Mavic 3 at $2,199 (about Rs 1.6 lakh). This is the price for the drone’s standard model. A more expensive option is the DJI Mavic 3 Fly More Combo pack, which includes several more accessories than the base model. It costs $2,999, which is almost Rs 2.2 lakh.

The DJI Mavic 3 base model comes with the RC-N1 remote controller, three wires, a battery charger, a storage cover, and three propeller sets. Two batteries and a battery charging hub, five pairs of propellers, an ND filter set, and a convertible carrying case are included with the step-up option. The entire collection is intended for those who enjoy shooting movies in difficult-to-reach locations.
Then there’s the DJI Mavic 3 Cine, which is the flagship model. DJI Mavic Cine 3 is a limited-edition drone featuring a built-in 1TB SSD and exclusive features including Apple ProRes 422 HQ compatibility, priced at $4,999 (about Rs 3.7 lakh). Three batteries, a DJI RC Pro (remote controller), a battery charger and hub, a storage cover, six sets of propellers, two ND filters, and a convertible carrying bag are included in the special edition.

For the time being, the DJI Mavic 3 is only available in the United States. The product’s global availability has yet to be declared.

Specifications for the DJI Mavic 3

In terms of design, the Mavic 3 and Mavic 3 Cine are very identical. What makes a difference is what’s on the inside. In terms of the base model, the DJI Mavic 3 has a dual-camera system with a 28x hybrid zoom lens and a Hasselblad 4/3 sensor. The lens allows the drone to shoot photographs with a resolution of up to 20 megapixels and 5.1K video at 50 frames per second. It can record 4K video at 120 frames per second in slow motion. In low-light situations, it also offers enhanced noise correction.

The omnidirectional obstacle sensors on the new camera drone are a major selling point. Six fish-eye sensors and two wide-angle sensors are included in the set of sensors, which allow the drone to avoid colliding with things while flying. In addition, an AirSense technology warns the drone’s pilot when it is flying too close to planes and helicopters, as well as geofenced locations.