This map shows how the huge, complicated network of undersea cables which keep the internet running is spread around the world.

The map, by telecom analytics company Telegeography, uses coloured lines to show how there are many hundreds of fibre optic cables running under the world’s oceans.

It shows the sheer scale of the infrastructure which keeps the internet running. It’s built up over decades, mainly as a result of private enterprise rather than coordinated state infrastructure projects, like road or water networks.

Lines shown on the map above are not exactly geographically correct, but they show the broad path of the cables and which territories they connect. 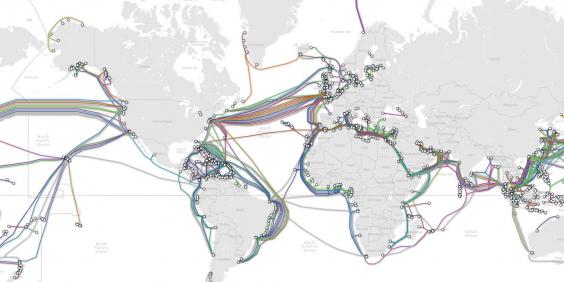 According to the Asia-Pacific Economic Cooperation forum, 97 per cent of all intercontinental data is carried via such cables.

Although they are of obvious strategic importance to the countries involved, relatively little is done to guard them. In recent months, defence authorities have started to warn that state aggressors — Russia in particular — could cut them.

A US admiral, one of Britain’s most senior military commanders, the former head of GCHQ and a London-based think-tank all made similar warnings in a matter of days late last year.