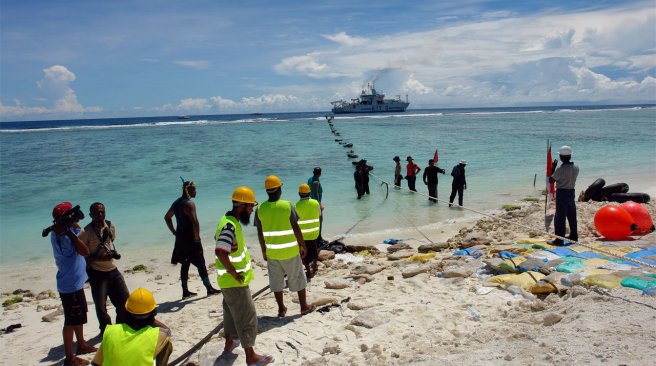 The IT and ITeS sector is all set to get a fillip in the red citadel West Bengal with the Centre deciding to set up a marine cable landing station in the state.

Millennium Telecom, a joint venture company of two telecom PSUs Mahanagar Telephone Nigam Limited and Bharat Sanchar Nigam Limited has floated a Rs 1,600-crore (Rs 16-billion) tender to lay a submarine cable between India and South East Asia, the landing station for which would be located in West Bengal.

“The cable landing station for this cable would be set up at Digha in West Bengal,” the department of telecommunication has informed the state government.

This is likely to give a boost to the local IT-ITeS industry in the state.

“…It was a long felt need for Eastern India, considering the vast potential of this region in IT and ITeS sector. The cable landing station will be of immense help in harnessing the hitherto untapped potential,” state Minister-in-Charge for Information Technology Debesh Das said in a communication to the DoT.

A cable landing station (CLS) is the location where a submarine or other underwater cable makes landfall. Globally, it is observed that CLS provides a strategic advantage to local IT firms as proximity to landing stations help in faster and cheaper transfer of voice and non-voice data.

With IT-BPO majors setting up shops in the state, the landing station would further boost the sector.

Also, Kolkata featured among the seven leaders in the country’s IT-BPO growth story, clocking an annual growth rate of 15 per cent.