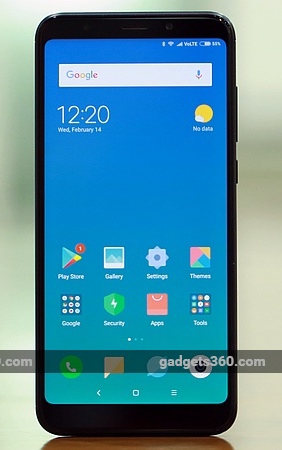 Welcome back to our roundup of all the tech happenings of the week. It was a busy week for Xiaomi, as the Chinese device maker announced new products in India, starting with the Xiaomi Redmi Note 5 (review). It was launched on Wednesday with a starting price of Rs. 9,999, and goes on sale from February 22. The Redmi Note 5 is powered by a Snapdragon 625 SoC, and it has a solid 4000mAh battery.

We reviewed the 4GB variant of the phone, priced at Rs. 11,999, and came away impressed but the build quality, the battery life, and most of all, the camera quality. The Redmi Note 5 took good shots both during the day and in low light, and macros turned out better than expected. However, selfies are a little grainy, although they’re still usable for social media.

If you want something that’s a step up, you could also consider the Xiaomi Redmi Note 5 Pro (review). Launched at the same time as the Redmi Note 5, the Note 5 Pro features higher end internals, and therefore starts at a higher price of Rs. 13,999. It has almost the same dimensions, complete with the 5.99-inch full-HD+ display, and the 4000mAh battery. However, the Redmi Note 5 Pro has 4GB and 6GB RAM variants, compared to the 3GB and 4GB variants for the Redmi Note 5. Aside from that, the Pro is based on the Snapdragon 636 SoC, and the big difference is in the cameras.

As we noted in our Redmi Note 5 Pro review, the phone has a dual-camera setup at the back, with 12-megapixel and 5-megapixel sensors, and a 20-megapixel front camera. The secondary rear camera is only used for sensing depth for portrait mode, and it’s pretty accurate. Daylight shots look good, and although focus slows down in low light, the photos still look pretty good. The selfie camera also works really well in daylight, and there’s a selfie-light for indoor use. All in all, the phone’s a really good all-rounder.

Aside from these phones, Xiaomi also launched its first Mi TV in India – the Xiaomi Mi TV 4, 55-inch television which supports both 4K and HDR, and is priced at only Rs. 39,999. The television is powered by Xiaomi’s Patchwall interface, and you can control your set top box entirely through its remote; search for shows on TV, or browse through the guide without having to rely on the DTH provider’s interface. The software is being powered by Bengaluru-based Sensara, and bears some similarities to that company’s Sensy Fusion box.

Like the Redmi Note 5 and the Redmi Note 5 Pro, the Mi TV will also be sold from February 22, and will be available via Mi.com, Flipkart, and Mi Home stores. The TV will be available in only one size, and for the first three months, the Mi IR cable (worth Rs. 299), and on-site installation (priced at Rs. 1,099) are included in the price of the TV.

Aside from this, Xiaomi also tied up with Reliance Jio to offer a Rs. 2,200 cashbackon phones, and a double data offer as well. People who buy either a Redmi Note 5 or Note 5 Pro will receive 44 cashback vouchers of Rs. 50 each, which can be used with Jio’s Rs. 198 or Rs. 299 plans. Subscribers will also get double data.

Later in the week, Jio announced its Reliance Jio Football Offer, extending the same deal to new smartphones from a wide range of brands. The offer is eligible for select phones from brands like Samsung, Xiaomi, Asus, Motorola, Panasonic, Huawei, Nokia, LG, Micromax, 10.or, BlackBerry, and LYF.

Apart from this, Reliance’s smart-feature phone, the Jio Phone (review), is now available to buy via Amazon India, priced at Rs. 1,500 which can be refunded at the end of three years. Customers buying the phone using Amazon Pay balance will get a Rs. 50 cashback, and there’s a 50 percent cashback up to Rs. 50 on recharges as well. The Jio Phone also got an official Facebook app, although there’s still no official WhatsApp app for the Jio Phone.

Airtel announced a Rs. 9 recharge, which gets you unlimited local, STD, and roaming calls for one day, similar to Reliance Jio’s Rs. 19 plan. You also get 100MB of data on this plan; Airtel also has a Rs. 23 plan which also has unlimited calling, and 200MB data. Ideahas also updated its plans, with its Nirvana postpaid plans all offering more data per month. The company first updated its Rs. 499, Rs. 649, and Rs. 999 plans, but now it’s expanded this to its entire range of offerings. BSNL also unveiled new unlimited voice and data plans, for Rs. 99 with a validity of 26 days, and Rs. 319 with a validity of 90 days. It also unveiled a Rs. 999 recharge, which offers 1GB data per day for 1 year, and unlimited calls for 6 months.

How Wifi Dabba Is Offering Internet Access for a Day at Rs. 2

WhatsApp’s UPI payments was first seen on its beta last week, and this week, it started rolling out to all users in a wide beta that’s been capped to 1 million users. It was later confirmed that a ‘full feature’ money transfer service will be launching soon in India, where it has more than 200 million users. Not everyone has been pleased with the rollout though – Paytm raised security concerns and also pointed out that WhatsApp’s UPI implementation isn’t properly interoperable. Although the NPCI – which is in charge of the UPI – stressed that WhatsApp is in a trial phase, Paytm has raised concerns about the size of the trial as well.

Using WhatsApp to transfer money is incredibly simple though. By obscuring options such as entering a VPA, and simply automating much of the UPI flow, WhatsApp has made it much simpler to use than other apps. Sending money is as easy as sharing a photo or your location on WhatsApp, and you can read our WhatsApp guide in case you have any questions.

WhatsApp Payments Rolling Out in India: How to Get Started With the UPI-Based Service

Meanwhile, Google continues to roll out lite versions of its different apps, setting the stage for Android Oreo (Go Edition). The latest app in the list is Gmail Go, which is a lite version of Gmail, as the name suggests. It supports multiple accounts, and the app is half the size of its full featured sibling. Despite that, it provides the same smart inbox and looks pretty similar to the otirinal app.

And on the phones front, we also got a large number of leaks about the upcoming Samsung Galaxy S9 and Galaxy S9+, ahead of the two phones’ launch at the Galaxy Unpacked event on February 25, just ahead of MWC 2018 in Barcelona. For one thing, new leaks suggest improved camera performance, which is a safe bet. Expect better low-light performance, and a slow-motion camera feature. Another teaser also hinted at an upgrade to the front-facing iris scanner. Separately, the Galaxy S9+ is likelyto get a dual rear camera setup, while the Galaxy S9 is not.

Another leak says that the phones will feature 3D emoji that mimic the user’s facial expressions, similar to Apple’s Animoji. Further leaks say the phone will come with stereo speakers. Aside from this, the wireless charger was revealed thanks to a user manual found on the Samsung website. It’s expected to be priced at around EUR 75 (roughly Rs. 5,900). And on Reddit, a user who claimed to have used the phone for about 20 minutes says it’s very similar in design to the Galaxy S8, though there is a “slightly better placed” fingerprint sensor on the back. The Redditor also said that 3D emoji is “not a direct ripoff” of Animoji, “more like a mix between Animoji and Bitmoji” and “looks less polished than Apple’s version.”

Apart from this, another leak suggests that the upcoming HTC Desire 12 will be an entry-level smartphone with an 18:9 display. The pricing and availability haven’t been disclosed yet, but it’s believed that this will be one of the cheapest phones at this aspect ratio. We may also have gotten a look at the LG G6 successor – a leak of the ‘LG Judy’, which it’s believed will be releasing in June, could be LG’s new flagship. The phone’s going to have a 6.1-inch display, and a Snapdragon 845 SoC on the inside.

A live image leak of the Nokia 7 Plus also points to an 18:9 aspect ratio, and suggests that the phone is being tested in India, as the word ‘namaste’ is visible. There is apparently a stock Android experience, likely to be an Android Oreo version. Renders also revealedthe specifications of the phone, as well as the Nokia 1. We also got a specifications and design leak for the Moto G6, Moto G6 Play, and Moto G6 Plus. The phones are expected to be priced at around Rs. 12,000, Rs. 15,000, and Rs. 17,000 respectively, and will likely launch before June 30.

There were also a number of other launches this week, including a 4GB variant of the Nokia 6. The handset has 64GB storage. This variant has been launched as a Flipkart-exclusive, priced at Rs. 16,999, with an additional launch discount of Rs. 2,000 – bringing it to Rs. 14,999, the same price that the 3GB RAM variant is currently selling for online.

The handset has a 5.5-inch full-HD display, a Snapdragon 430 SoC, 16-megapixel rear camera, and an 8-megapixel from camera. The 4G VoLTE capable phone supports Dolby Atmos audio, and comes with a 3000mAh battery.

The Oppo A71 (2018) has been launched in India just days after its initial availability in Pakistan. It’s available with a price tag of Rs. 9,990 and is already available for purchase through Flipkart. It has a 5.2-inch HD display, a 1.8GHz octa-core Snapdragon 450 SoC, and 3GB of RAM, along with 3000mAh battery.

We also saw the Moto Z2 Force bundled with the TurboPower Pack Moto Mod worth Rs. 5,999 launched in India, priced at Rs. 34,999. The phone is powered by a Snapdragon 835 SoC, with a 5.5-inch QHD display, 6GB RAM, and 64GB storage. There are two 12-megapixel cameras on the back, and a 5-megapixel camera on the front, and it has a 2730mAh battery, while the bundled Moto Mod has a 3500mAh capacity.

There were two other launches this week: after a special preview event in November, Dyson is now officially in India, with its first store open in Delhi, bringing vacuum cleaners, air purifiers, and hair dryers; and the Amazon Echo speakers have exited the invite-only launch, and can now be bought offline as well. According to Amazon, the three months of invite-only were to get the smart speakers in the hands of early adopters who were going to be okay with a device that’s a little rough around the edges.

By now, the company added, it’s learned what the Indian customers want, and improved its smart assistant Alexa’scapabilities for the market. The top request? To teach ‘her’ Rajinikanth jokes.